Bob advised Skip that he had a number of police and emergency service clients and that they would be interested in meeting him and swapping shoulder patches. Bob suggested that Skip pack his police uniform and bring a supply of patches.

One of the guys who expressed an interest in meeting Skip was Jeff. Jeff is also a long standing client of The Flat Top Crew and a thoroughly decent bloke, as well as a really thoughtful guy.

Jeff was recently in the US with his wife and children and would have liked to go on patrol with some US coppers; unfortunately the opportunity did not present. Jeff thought that Skip might enjoy going on patrol with him and offered to get approval to take Skip out on patrol. Skip enthusiastically accepted the invitation, Jeff obtained approval and Skip subsequently accompanied Jeff on an afternoon shift.

Skip really enjoyed the opportunity of going out with Jeff on his shift and saw this as one of the highlights of his Australian holiday.

Skip did take some time for relaxation and went to both the Sunshine Coast and Gold Coast.  The top pictures show him relaxing at Charlies in the Cavill Avenue Mall at Surfers Paradise and at the Laser Lighthouse at Point Danger, standing with one foot in Queensland and the other in New South Wales.

The pictures below show Skip testing the surf at Greenmount Beach on the Gold Coast. 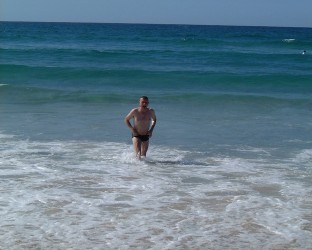 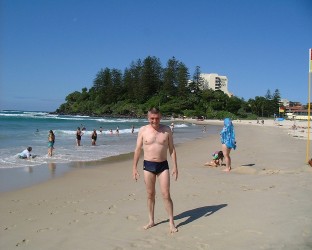 Skip's Oz adventure came to an end on 16th March 2000, when he checked in at Brisbane International for a flight to LAX via AKL. 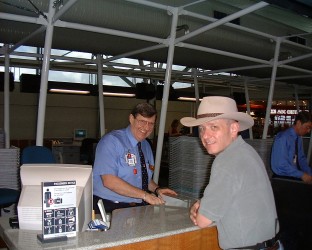 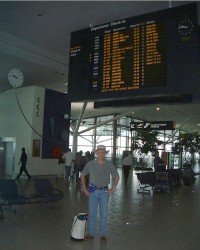 Well, the next best thing to a flat top is an Akubra!

Skip is now back home in the US and is planning another trip to Australia for sometime next year. He is hoping to get enough guys interested to make up a group.