You guessed it! 14th August was Bluey Day, formerly known as Crop-A-Cop and these boys in blue (and one in white!) participated with about 50 other police (both men and women) and army officers.

This year, Bluey Day in Brisbane was staged a week early to coincide with the last day of the annual Brisbane Exhibition and was actually staged in the Exhibition Grounds. (National Bluey Day will take place on 21st August 1999 in Adelaide and about 100 police from Queensland will travel to South Australia for the national event.)

Michael, Red Dog and Tony have been Flat Top Crew clients for a couple of years, and Tony arranged with the organizers of Bluey Day for Bob to perform the shaving.

Towards the end of the event, Ken, another Flat Top Crew client walked into the auditorium to see a police friend being shaved. Ken is a senior ambulance officer with the Queensland Ambulance Service and was in uniform at the time. Somebody remarked that no ambos were participating in Bluey Day this year.

Before Ken had a chance to think about it, he was up on stage and the TV commentator was calling for donations for Ken to "lose his flat top". A quick whip around the audience with the hat grossed $320 and Ken was in the chair!

Afterwards the guys and gals went to have a few drinks and show off their new haircuts. Ken, on the other hand, went back to work, probably wondering what Jenny, his wife, was going to think of his new look when she met him that evening after work. 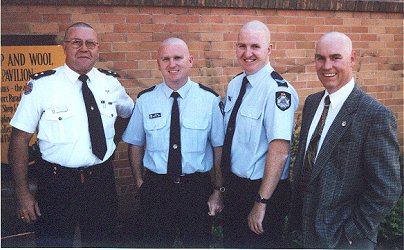 A 30 minute video of the day was also produced, which is available on request, to any of the police who participated. Please contact Bob on 041 2170352.