All the guys had a great time and attracted a lot of attention - especially from some of the ladies, who felt compelled to test some of the flat tops, presumably for flatness! Billy came up with the best quote of the evening. When asked by one of the many curious patrons as to why we were there, he replied that the guys were "Saving Private Ryan"! I think they believed him too! 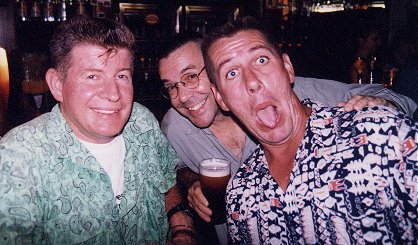 The awards for the evening went to:
Gavin, for escaping the camera all evening.
Billy and Jamie, for lasting longer than anybody else. (Rumour has it that they were still partying on at 4am.)
Graham, for getting an attack of the munchies and disappearing at 1am to get nachos from the restaurant across the road. (He's got a cast iron stomach.)
and to Brendon, for the shortest flat top. Brendon's razor shaved landing strip and high and tight was impossible to beat.

Makes you wonder what they'll manage to come up with at the next pub night on Friday, 4th June, doesn't it?!